Tuesday, was Election Day but to me it was so much more. If you believe in hope and Love read on… but if you don’t stop right here! You have been warned this post has more saccharin in it than could kill a mouse.

I woke up today and decided to get balloons and streamers to host my first “pity party” I grew up with a strong German father that such festivities were not allowed in the house, let alone near the driveway. Well, sorry to disappoint you dad but today I could not leave all the crap at the curb. I was dealt a bad hand and today I was asking God to reshuffle the deck.

What kind of hand was I dealt, you may ask? Well for those of you who haven’t had the pleasure of playing euchre with me and are new to my table, I give you a quick recap of the previous tournaments and losing hands.

Fifteen years ago, the first hand the dealer dealt was divorce. I asked for extra cards and was dealt my ex becoming a paraplegic. Every time I sat to play, the crazy cards delivered something fun a quick recap for those keeping score at home; Divorce, ex become a paraplegic, financially broke, a lawsuit from my ex’s crazy second wife suing somehow my insurance from his snowmobile accident, burglary, and now Lyme disease.

So the past few weeks, even though I get IVs twice a week and are on two different antibiotics to kill the Lyme, have a recently added a third antibiotic to deal with another infection, had a back tooth pulled from Lyme too, I was great ! I was willing to sit down at the table and like my Grandma Laura from Ohio used to say while shuffling the deck  I stoically said, “Let’s play cards!” That was until poison ivy !

So yes, poison ivy made me want to blow my party horn directly at God. I yelled, “Seriously, Do you see me God?”

Lacing up my Brooks, I decided to go for a quick run, Before I could even turn the corner, there was Huey my beautiful old gentleman neighbor with arms outstretched, “ Lisa! I have missed you.”

With a bear hug he continued, “Just seeing you makes me happy!”

As I release my stout friend, I allowed my tight- mouth smile to open and say, “Aww Huey. Thanks, I feel the same about you.”

As I walked away, I looked up at the sky as tears evacuated my eyes and with a smirk said, “You do see me!”

Later that day, I was dealt a few aces under the table. I received a call from a California friend who was on vacation in Hawaii. She called to say that she felt pushed to call me today. Was I alright?

Then to round out my playing hand, I received two Jacks (right and left bower) of the trump card later that afternoon. The highest cards!! (Sorry if you have never played Euchre!)

As I walked to my doctor’s office, I saw Jaci, my beautiful warm-hearted nurse standing with out-stretched arms. As she wrapped her arms around me I could not helped but feel loved.

Within seconds she presented me with a Cub’s World Series t-shirt. She said, “You gave me a Ferris Bueller’s list of what to do on my Chicago vacation, how could I not repay you?”

I don’t cry easy but today I could not contain my joy. Jaci is a gift to anyone who is lucky to come in contact with her lovely spirit. She epitomes the saying, “Beautiful inside and out.”

I responded by saying, “I feel loved.”

She said, “You get love because you give love.”

Today I did not hang streamers or blow up balloons- there would be no pity party! As my stern but strong grandma Laura used to say  hitting her hand swiftly on the table while playing euchre, “ Here, here now! Quit the table talk! Let’s play cards!”

“We are pressed on every side by troubles but we are not crushed. We are perplexed as why things happen but we don’t give up and quit.” 2 Corinthians 4: 8

“Stay away from complaining and arguing … in a crooked and depraved world so that you may shine like a beam of great light!” Philippians 2:14-15

Follow The Whisper Within on WordPress.com
Join 3,208 other subscribers 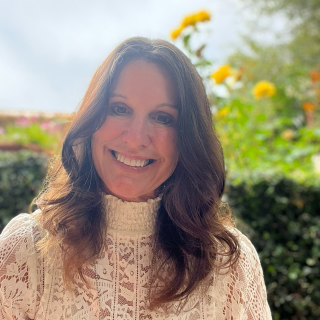 Hello! Thanks for stopping by. I have been single for the last twenty years raising my two beautiful children, Jake ( 26)and Tarah (25). I am a originally from Chicago but by listening to “The Whisper Within” I have recently moved to Southern California. I love to run, hike, bike, swim, and practice core yoga but have been sick for the last few years fighting Lyme disease. GOD will heal me but in the meantime, I choose to be happy and not settle for ordinary. I believe in the Fairytale, crave the butterflies, and surrender that God has the plan. Follow me on FB at The Whispers Within.